RSS
← Where Are All Those Episodes of DRAGNET? 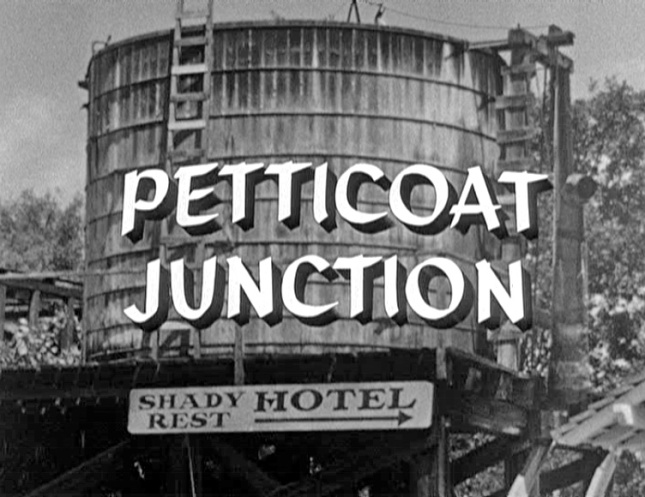 There’s something you notice while watching the first season of Petticoat Junction. The Bradley girls (except for the one whose father produced the show) experience a remarkable upper-body expansion.

The Bradley girls (Riley, Woodell, Henning) in the first episode of the season.

In the first episode (“Spur Line to Shady Rest,” 9/24/63), Billie Jo (Jeannine Riley) and Bobbie Jo Bradley (Pat Woodell) have perfectly pleasing figures. But over the course of the season, a captivating curvature is underway.

The ballooning bosom phenomenon is most apparent in Jeannine Riley, whose role on the show expands in tandem with her bra size. But before long, Pat Woodell is busting out as well. Was there a competitive bra-stuffing campaign underway? Or had the girls’ figures been craftily confined in the early going, gradually giving way to their full unbound glory as the year went on?

The DVD release for that season includes commentaries from castmates Woodell and Linda Henning, but their chatter is limited to gushing praise for each other and nostalgia for the time they spent on the show. Left unsaid is why Jeannine Riley left after the second season, how well they all got along, and why those very feminine dimensions seemed to grow over time. But maybe it’s all my imagination anyway.

All eyes are on Jeannine Riley in the last episode of the season.

I didn’t have high hopes for Petticoat Junction. I’m too young to remember its original run, and I never saw it in syndication. But I found it to be a pleasant little show, for the first dozen or so episodes at least. Afterward, the freshness is about gone and it becomes a pretty generic sitcom.  But you do get to see old pros like Bea Benederet, Edgar Buchanan and Charles Lane on a regular basis, and the theme music is one of my very favorite TV tunes of all time. There are a good handful of memorable episodes, like “Bobbie Jo and the Beatnik” (1/7/64, with Dennis Hopper), and every now and then a touch of sweetness emerges and overcomes the sitcom tropes and the canned laughtrack. The Christmas episode (“Cannonball Christmas,” 12/24/63) is a good example.

In later seasons, Billie Jo and Bobbie Jo would be played by Meredith MacRae and Lori Saunders, charming actresses who became big fan favorites. But my own favorite of the Bradley girls remains Pat Woodell, who left the show after the second season, looking for an elusive singing career. That didn’t really work out, but I have to admire her courage in walking away from Hollywood to pursue a dream, and it’s easy to admire someone this beautiful and appealing anyway. She passed away last September.

Also from the last episode of the season: Pat Woodell stands out.

← Where Are All Those Episodes of DRAGNET?